Whether you’re a man or woman, understanding your birth control options is important when you want to prevent pregnancy, start trying to become pregnant, or space your pregnancies. Choosing birth control that fits your life will give you the best protection because you’ll be more likely to use it correctly and consistently. Talk to your health care provider about the method of birth control that’s right for you. 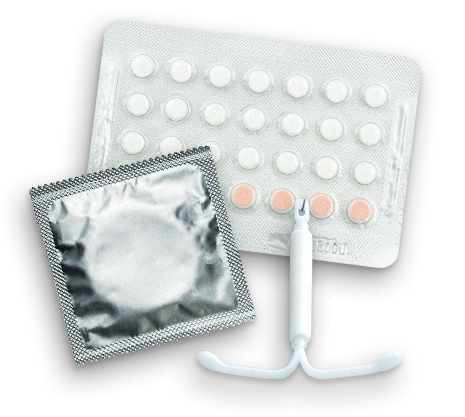 A hormone pill taken every day to prevent pregnancy.

A hormone (progestin) injection given to help prevent pregnancy.

A thin covering that fits over a hard (erect) penis to prevent pregnancy and STIs.

A pill or IUD that is used if you've had unprotected sex or are not sure if you are protected from pregnancy.

A type of hormonal birth control that you wear on your skin.

A small, soft, T-shaped device that is put in the uterus by a healthcare provider to help prevent pregnancy. Can be a copper (IUD) or hormonal (IUS) type.

A flexible latex or silicon disc that is put in the vagina and used with a spermicidal gel.

A clear plastic ring that is put in a vagina to prevent pregnancy.

What are my birth control options?

There are many methods of birth control. Some prevent pregnancy by stopping the egg from being released (ovulation). Others act as a barrier to prevent sperm from reaching and entering the egg.

There are many different types of condoms (styles, shapes, and sizes). Most condoms are latex, but there are non-latex ones. All condoms sold in Canada must meet government standards. To learn more, go here.

It decreases the risk of pregnancy by stopping the sperm from getting to or entering the egg. It reduces the risk of STIs by stopping semen, vaginal fluid, or blood from being passed between sexual partners. To learn more, go here.

An intrauterine device (IUD) is a small, soft, T-shaped device with a nylon string attached to it. A health care provider has to put it in. There are 2 types of IUDs (copper and hormonal). Hormonal IUDs are sometimes called intrauterine systems (IUS). They work in different ways. Depending on the type of IUD, it can help prevent pregnancy for 3 to 10 years. New research suggests that long-acting methods of birth control such as IUDs work the best for preventing pregnancy over time. To learn more, go here.

The pill is taken every day to prevent pregnancy. It contains hormones (estrogen and progestin) that are like a woman’s natural hormones. They stop the ovaries from releasing an egg. You can’t become pregnant if you don’t release an egg. To learn more, go here.

The birth control patch is a thin, light brown patch that you wear on your skin. It has to be changed once a week. The sticky part contains hormones (estrogen and progestin) that are like a woman’s natural hormones. These hormones are absorbed through the skin. They stop the ovaries from releasing an egg. You can’t become pregnant if you don’t release an egg. To learn more, go here.

The vaginal contraceptive ring is a soft, 5.5 cm (2 inch), clear, plastic (non-latex) ring that you put in your vagina once a month. It contains hormones (estrogen and progestin) that are like a woman’s natural hormones. They stop the ovaries from releasing an egg. You can’t become pregnant if you don’t release an egg. To learn more, go here.

Extended use is when you take your birth control product for 2 or more cycles without stopping, then take a planned, hormone-free break. You’ll have your period during this break. This method means that you’ll have fewer periods.

Continuous use is when you take your birth control product without stopping (without taking planned hormone-free breaks). You’ll have fewer or no periods.

Progestin-Only Pill (POP), also called the mini-pill, is a pill you take every day to prevent pregnancy. POP contains one hormone (progestin). It doesn’t contain estrogen. POP comes as a 28-day pack (there are hormones in all 28 pills). There are no hormone-free pills. POP prevents pregnancy by:

making the lining of the uterus thin

The birth control injection contains a hormone (progestin) that is like a woman’s natural hormone. It doesn’t contain estrogen. The hormone stops your body from releasing an egg, makes the lining of the uterus thin, and makes cervical mucous thick. You need a prescription for the injection. It needs to be given every 10 to 12 weeks. To learn more, go here.

Vaginal spermicides are put in the vagina before sex to help prevent pregnancy. They contain an ingredient called nonoxynol-9 that kills sperm. In Canada, spermicides come as film or foam. Spermicidal gel is not available. Spermicides are considered to be among the least effective of all birth control methods. To learn more about spermicides and how to use them, go here.

A diaphragm is disc-shaped, made of latex, silicone or nylon, and has a flexible rim. It’s inserted into the vagina before you have sex. It covers the cervix and stops sperm from entering the uterus. A diaphragm is intended to be used with a gel that kills sperm (spermicidal gel). There are no Health Canada approved spermicidal gels containing nonoxynol-9 available in Canada. People who use a diaphragm should use an acid buffering gel (e.g. Contragel®, Caya Gel ®) which forms a barrier in front of the cervix, lowers pH of vaginal fluid which slows down sperm. To learn more, go here.

The sponge is a one-size, disposable piece of polyurethane foam that’s put in the vagina to cover the opening to the uterus (cervix). The sponge is filled with nonoxynol-9, which is a chemical that kills sperm (spermicide). It helps prevent pregnancy by killing sperm and preventing sperm from entering the uterus. To learn more, go here.

Fertility Awareness-Based (FAB) methods, sometimes called natural family planning, identifies the days of the month when the egg is ready to be fertilized and becoming pregnant is most likely (fertile time). This can be used to:

Lactation Amenorrhea Method (LAM) (used after the birth of a baby)

LAM is a way for breastfeeding to temporarily help prevent pregnancy. It must be used correctly to
work. Lactation means your body is making breastmilk and amenorrhea means you aren’t having
a monthly period. Breastfeeding hormones may stop your body from releasing eggs. You can’t get
pregnant if you don’t release an egg. LAM only works if your:

LAM does not work if you don’t have all 3 things above. To learn more, go here.

You can use emergency contraception (EC) if you aren’t sure if you’re protected from pregnancy (e.g., condom breaks, forgot birth control), or if you’ve had unprotected sex. EC doesn’t protect against STIs and HIV. It needs to be used right away, but can be used up to 5 days (120 hours) after unprotected sex. The two methods of EC are emergency contraception pills (ECPs), and the copper intrauterine device (IUD).

The copper intrauterine device (IUD) requires a prescription and it is put in by your health care provider.

A tubal ligation is a permanent method of birth control. Surgery is done to close the fallopian tubes (the tubes that the egg travels through). This stops the egg and sperm from meeting. If the sperm can’t reach and enter the egg, you can’t become pregnant. To learn more, go here.

A vasectomy is a permanent form of birth control. The tubes (vas deferens) that carry the sperm from the testicles into the semen are cut and sealed. This means there’s no sperm in the semen, so no sperm to reach and enter the egg. To learn more, go here.

Withdrawal is used during vaginal intercourse to reduce the risk of pregnancy. Withdrawal is when the penis is pulled out of the vagina before ejaculation. Ejaculation can’t happen near the partner’s vagina. If semen is near the opening of the vagina, sperm can reach and enter the egg. To learn more, go here.

Abstinence means different things to different people. Some people make the decision not to do these types of sexual activities. Abstinence to prevent STIs or pregnancy means that you don’t:

If you choose not to have sex, it means that you don’t need to use other forms of birth control and that you’re protected from STIs and HIV. To learn more, go here.

How soon after I stop birth control could I become pregnant?

Don’t assume that your body needs time to adjust. You could become pregnant as soon as you stop using birth control, even if your periods are not regular.

Even if you’ve been using birth control for a long time, you can become pregnant without any risk to your health or the health of the developing baby.

To learn more, see Getting Pregnant after Stopping Birth Control.

What do I do if I’m pregnant?

If you think you might be pregnant and want to know the options (parenting, abortion, adoption) available to you, visit the AHS Sexual and Reproductive Health page for local resources and supports.

If you are pregnant and want more information about pregnancy and parenting go to Healthy Parents, Healthy Children or get a print copy

For information about abortion services in your area, click here.

For more information on services in your area call Health Link at 811.

Talk to your health care providers about what’s right for you.

Where can I get help?

Information specific to abortion can be found here: ahs.ca/abortion

Ready or Not contains a lot of information. So we created My To-Do List for you to use as a personal reminder, share with your partner, or bring to your next check-up.

Be sure to click “Add this to my To-Do List” anytime you see something you want to print, email, save, or share. Because we do not ask for any personal information, your list will only be saved for a week after your last added item.